I pinched the heading from Wikipedia and I hope that it reads as Mumbai to the initiated. Please accept my apologies if it means anything unintended.

I emerged from the airport there late at night, the hotel transfer got me to the Taj Mahal Palace Hotel in the wee hours of the following morning. The very first impression was the number of people on the streets, many working, some walking but the majority seemed to be eating, at midnight, in little restaurants and cafes opening onto the street.

Security was fairly tight at the hotel. This was one of the buildings attacked by a group of Pakistani terrorists in November 2008. Retractable bollards now prevent vehicles from reaching the main entrance until the underneath has been scanned using mirrors and the bonnet, boot and interior have been given the once over. To get into the lobby you must pass through a metal detector whilst your hand luggage is x-rayed. Your suitcase will also be x-rayed before it is delivered to your room. No worse than airport security and although a sad reflection on the modern world, worth it. That attack on Mumbai was carried out by 10 men and lasted three days. They killed 164, of those about 30 died in the Taj.

The welcome is very gracious. The arriving guest is draped with a garland of flowers, a small red dot is placed on the forehead. The room looked out over the Gates of India onto the sea. A luxurious start to my trip, and since I was going bush after two nights, I thought it likely to be the only real luxury to expect. 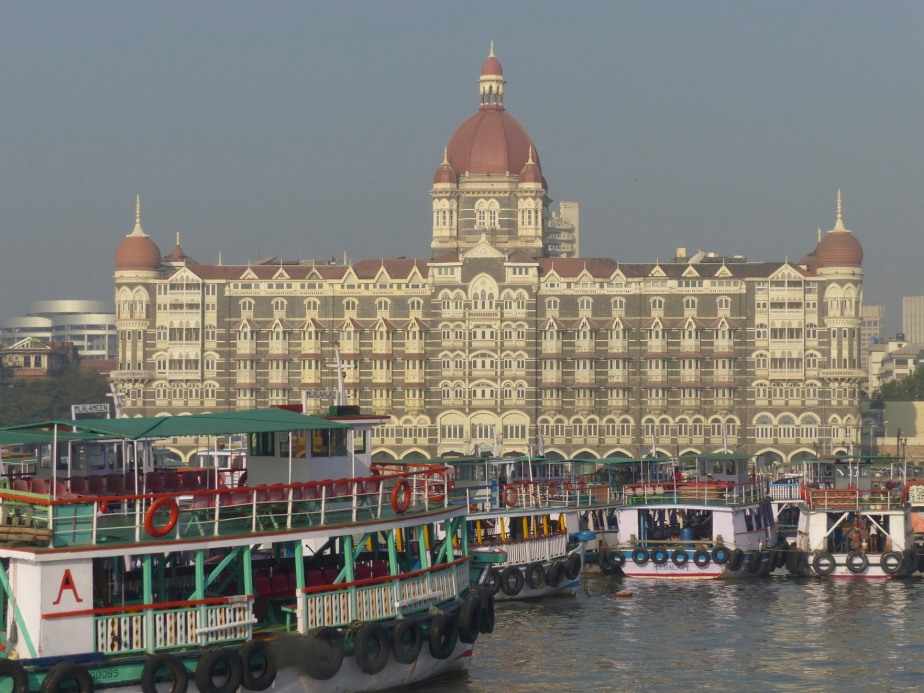 Mumbai previously known as Bombay, is the capital city of the state of Maharashtra. It is the most populous city in India, and the fourth most populous city in the world, with a total metropolitan area population of approximately 20.5 million. The conurbation is one of the most populous urban regions in the world. Situated on the west coast of India Mumbai has a deep natural harbour. It is also the wealthiest city in India, and has the highest GDP of any city in South, West or Central Asia. Mumbai is, of course, Bollywood.

Mumbai is built on what was once an archipelago of seven islands that have been inhabited since the Stone Age initially by fisher folk. From 1782 to 1784, the city was reshaped with large-scale civil engineering projects aimed at merging all the seven islands into a single amalgamated mass. The problems of getting around the place continue to be solved, the Western Express highway runs across a long causeway, road building and flyover construction continue apace.

The Portuguese ruled the city from about 1534, the British from about 1661 until independence in 1947. Depending on which newspaper you read, it is now ruled by the Mafia or corrupt politicians or a combination of both.

Mumbai has a tropical climate with seven months of dryness and a monsoon that peaks in July. December to February is the cool season. In January the mean high temperature is 30.6°C, the mean low is 16.4°C. Rain is unlikely. Air quality is not real flash.

The Mumbai Mafia reach the peak of their notoriety in the building industry, little different from Australia really. Building collapses made the news whilst I was in India but by Mumbai standards they were relatively small-scale events. One of the collapses in 2013 killed 72. Mumbai’s slums are said to provide housing for approximately 60% of the city’s population.

One thought on “मुंबई …”