Our Google globe has been placed north up with Australia at the bottom, Japan at the top.

Japan is part of a great archipelago that hangs off the Kamchatka peninsula and curves away to the east of the main landmass of Asia, swings away around the north of Australia and then down to New Zealand.

If we superimpose the relevant part of the Great Ring of Fire on the map we can then deduce a great deal about the underlying geology. 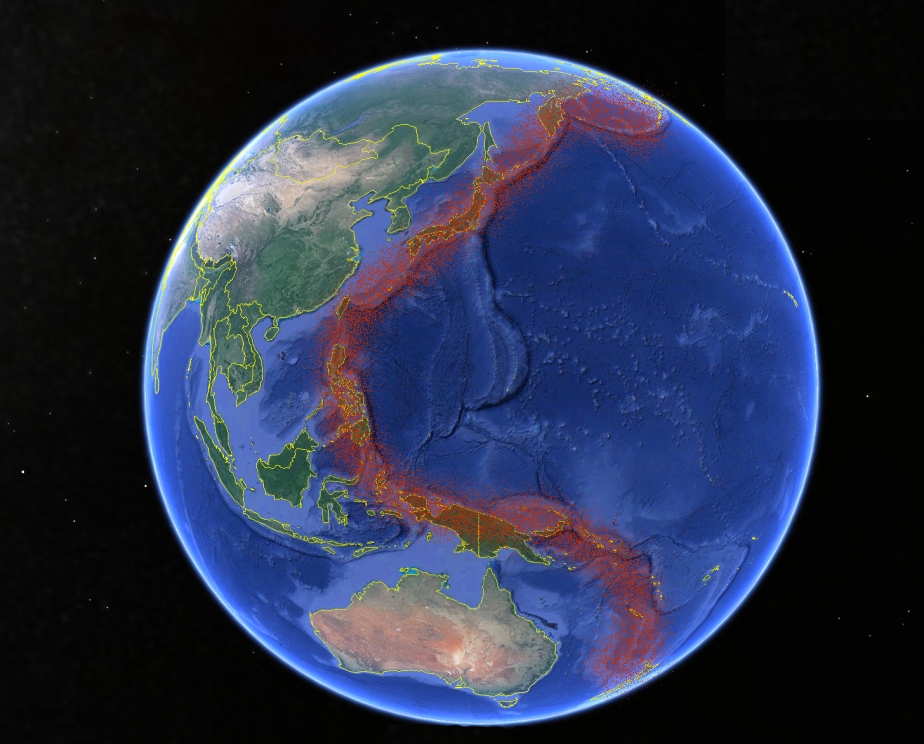 The Japanese part of that great archilelago consists of almost 8,000 islands between latitudes 24°N and 46°N, and longitudes 122°E and 146°E. That’s 2600 km from Okinawa to the tip of Hokkaido. The four largest islands are Honshu, Hokkaido, Kyushu and Shikoku and together they make up about 97% of the land area.

Japan is mountainous, only 27% of the country is suitable for agriculture and urban settlement. It is prone to volcanic eruptions, earthquakes and tsunamis. There are more than a hundred active volcanoes. More than 140,000 people died in the Tokyo earthquake of 1923. The 2011 magnitude 9.0 earthquake off the Pacific coast of Tōhoku killed about 18,000 people and triggered several nuclear accidents.

From a natural disaster point of view Japan is the most dangerous place in the developed world.

Looking from China, Japan lies in the direction of the rising sun, hence the way Japan is rendered in Kanji is 日本. The Chinese character 日 means sun or day; 本 means base or origin, combined they convey the meaning sunrise.

The population is about 126 million people and slowly declining. The population density is high in the areas suitable for settlement.

Japan has the third largest economy in the world, but things aren’t quite as great as they used to be.

Life expectancy ranks second in the world. The infant mortality rate of 2 per thousand live births is as low as any where in the world. Educational standards are high.

Virtually no one shoots anyone else in Japan but they make up for that to some extent by killing themselves. Suicide is the leading cause of death in people under thirty.

The whole place is in one time zone (GMT +9hrs) and they don’t mess with the clocks for summertime.

The electricity supply is 100 volts (not 120 like the US or 240 like Australia and the UK) the plugs and sockets are 2 pin connections compatible with their American counterparts.

The climate is officially described as temperate. What this means is that it’s mild in the south. Tokyo is hot and humid in summer and cold in the winter, not a threat to your ears and nose but remember the hat and gloves. Hokkaido is mild in the summer and definitely a threat to the extremities in winter, don’t leave home without your parka.

Wildlife has done well in Japan, bears, deer, voles, shrews, deer, mustelids and monkeys can all be found and the bird life is exceptional. The mountains have helped preserve habitat and modern Japan seems conservation minded. There are well managed wildlife reserves. And surprisingly it is a good place to go whale watching!

The birding is heavily influenced by the strong seasonality and the proximity to land north and south and there is always the chance of vagrants coming from the Asian mainland.

The only English language field guide worth having (for the moment) is … A Field Guide to the Birds of East Asia (2009), by Mark Brazil.

One thought on “A Little Geography …”