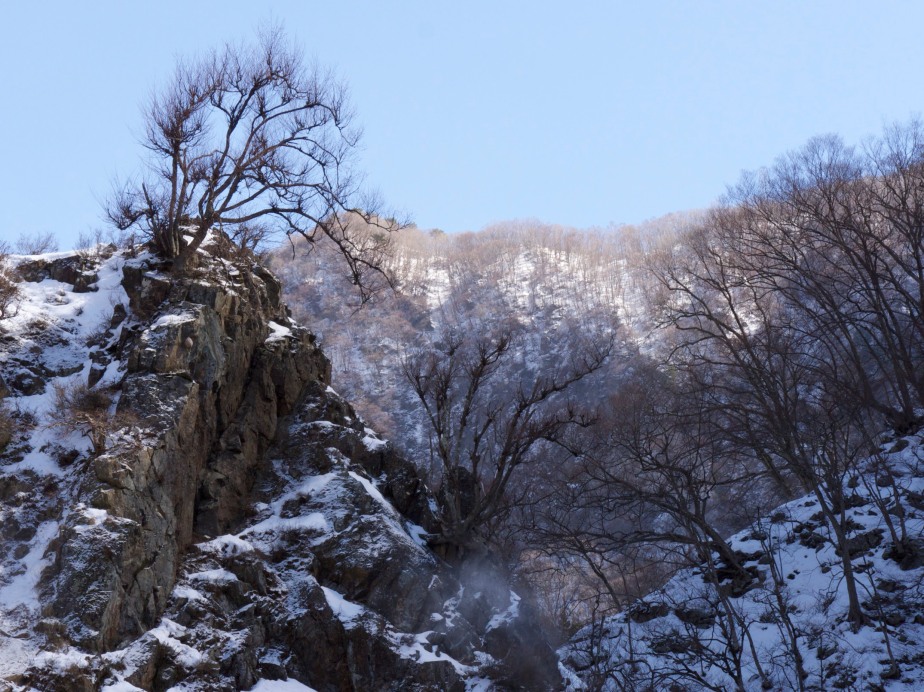 The two days spent in Jigokudani, the valley of hell, were far too pleasant to prepare me for any future place of residence. Yes it was cold and occasionally snowing but there was so much going on the weather hardly mattered.

As well as taking several layers of pixels off every passing macaque an eye had to be kept on the sky and the opposite hillside. At one moment a Golden Eagle drifted over at great height before slipping out of sight behind the mountain tops. It re-emerged lower and for a moment seemed to be the absolute master of the valley. Then a peregrine falcon came over the hill above it and stooped viciously down on it. Although it dwarfed the falcon the eagle did not linger.

Careful surveillance of the opposite slope was eventually rewarded with the sighting of a couple of Japanese Serow. This is an enigmatic beast. There are six species of Serow distributed patchily in east Asia. All are in the genus Capricornis. It is an even-toed ungulate which puts it in the same evolutionary ball park as antelopes, sheep and cows but exactly where it fits in the scheme of things has been a little difficult to decide.

This is mother and young. They feed morning and evening and rest up in the middle of the day. They moved slowly and steadily but are reportedly capable of making a swift and agile retreat when threatened. They inhabit steep forested hillsides in the major Japanese island except for Hokkaido.

They have been over-hunted in the past but numbers are now secure because of conservation measures.

One thought on “Mountains of Central Honshu …”