It was a late lunch but gee I enjoyed it.

The ride took me through Maryborough, out to Majorca and around Tullaroop Reservoir. Out to the right from there I could see Mount Tarrengower at Maldon, the highest point for  miles around. A Black Kite followed me for a couple of kilometers there. Perhaps it thought I would expire.

North past Cairn Curran reservoir, north again to the little town of Eddington. I must have blinked because I didn’t see any sign of it. Into the gold rush town of Dunolly and then south over the Mount Hooghly Ranges to home. Not a lot of people know the Mount Hooghly Ranges largely because there is no such geographical entity. A passenger in a car would hardly notice the hills. On a bike they make more of an impression. I reached the highest point of the ride at kilometer 103 – I organised that well!

I did it that way around because some of the route was unfamiliar and Dunolly being reasonably large was going to be easier to find than places like Baringhup West that are really nothing more than names on the map. 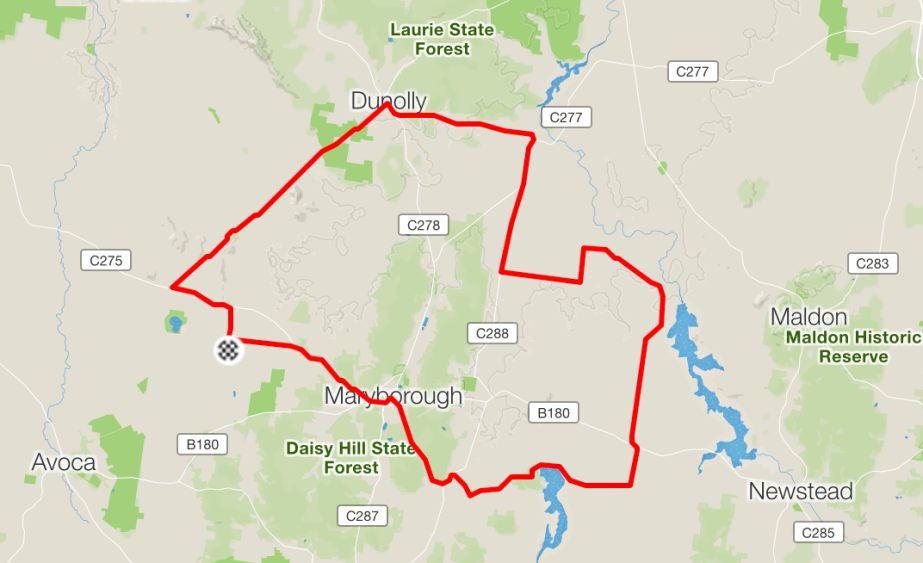 115 km at 24.3 km/h, 674 meters of climb. And that nailed the Strava May Distance Challenge with four days to spare. Another merit badge for the Trophy Cabinet.

What next you ask. Well, the other non-trivial monthly challenge is the climb.