… Die young. I have no particular objection to the first half of that particular motto but even as a youngster didn’t feel a great affinity with the second half. Nor has it been popular generally – not dying young is the reason we have a population that is on average getting older.

But, as I’ve said before, if I can have some extra please insert it in the middle not add it on the end. Anywhere in the healthspan will do fine just not on the lingering tail of the lifespan.

Increased life expectancy has largely been the result of public health measures, road safety legislation, improved medical services and an avoidance of widespread warfare. It’s all about keeping us from dying. Enjoying good health is quite distinct from merely surviving. This is where the user pays principle in healthcare cannot be avoided. It’s your body.  You will pay for what you do with it.

As a community we have shown a willingness to look after ourselves. Our intentions are good. We have, in the main, listened to good advice and reduced our smoking. We have also listened to dietary advice. Consumption of those things that we have been urged to reduce has gone down but nonetheless our weight has gone up. I think US data is good for Australia as well.

And the timing of the obesity pandemic is a bit suspicious … 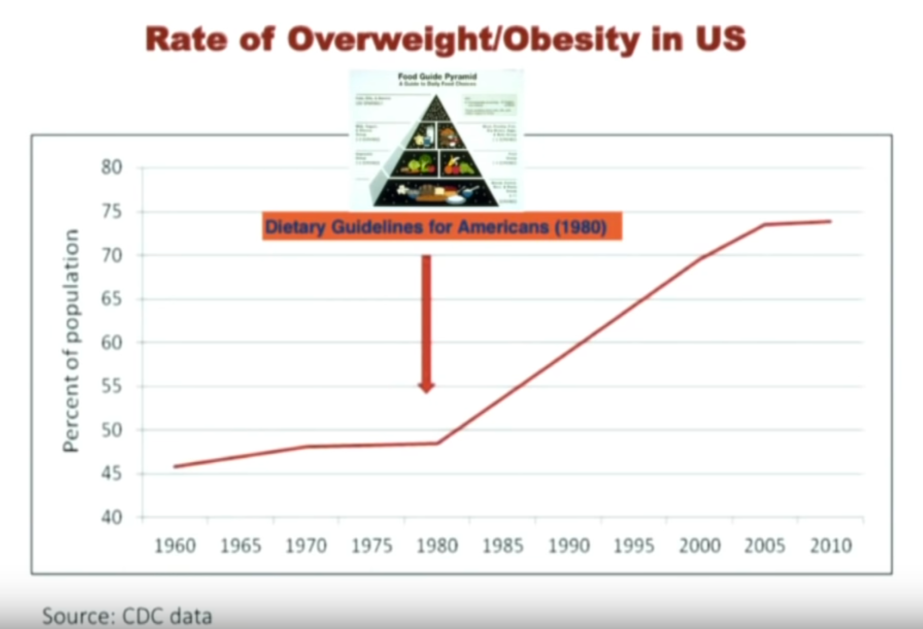 If I were defending the guidelines I’d be quick to point out that correlation is not proof of causation but hey, saturated fat was convicted on flimsier evidence than this.

So was it bad advice or simply an unequal battle against sugar – cheap, addictive and toxic? Nowhere in the guidelines did it say eat more calories but that is indeed what we’re doing.

Or is it, instead, a function of our ageing, a collective middle aged spread? If we turn our heads one morning, catch sight of our belly in profile and achieve enlightenment what should we do about it?

Ever wondered about the science behind the dietary guidelines? Let Nina Teicholz clue you in. The information density goes down the tubes once the show is opened up for questions (what can you expect from a Cato audience?) so you will miss nothing but discomfort if you quit at 44 minutes.