Resistance Exercise Training (RET) is good for you.

Muscle mass begins a slow decline from about 30 years of age, accelerating into old age and resulting in sarcopenia for most older people. There is a fair amount of strength in reserve at the beginning of this process but ultimately there may not be enough to cope with daily life activities. Falls and fractures are bad news for the frail elderly.

Good news – old muscles respond to training in just the same way as young ones. For a review of the science regarding RET in older folk see <HERE>.

If you have despaired at the mythology surrounding diet or cycling be ready to ignore an even greater torrent of nonsense regarding doing weights. High reps, low weights for stamina, low reps very high weights for strength, medium reps medium weights for bulk. It’s all frog shit.

Recovery and avoiding over-training are the other side of the coin. The science to back up these last few paragraphs can be found in a review paper by Morton et al. Their key recommendations include choosing weights that lead to volitional fatigue, three times per week with a total of at least 10 reps per muscle group and not more than 15 sets per muscle group.

And that leaves plenty of scope. I favour beginning with compound exercises such as squats and lat pull-downs, heavy enough so that 10 to 12 is the limit, 2 or 3 sets, followed by 1 set each for whichever individual muscles best serve your vanity. Don’t waste too much time on the biceps it’s the lats and deltoids that make the upper body!

Well at least that’s what the solar lobby hope.

Democracy hits a bump in the road when the electorate realises it can vote itself the contents of the treasury. The road bumps get bigger and bigger as the Political Parties have to promise more and more welfare to get elected. We could call it a Greek spiral in honour of a spectacular example.

Solar photovoltaic panels are expensive. Your reward, if you put them on your roof, is cheaper electricity. If nothing goes wrong with any of the fixtures and fittings they will pay for themselves in fifteen years or so. Householder thinks hey I can shell out a small fortune now and in fifteen years I will start to reap a profit and instead invests in a macadamia plantation … only five to eight years to wait for the break even point. Solar runs on subsidies and regulated quotas. Without them it will simply trickle along until it really does reach the level of competitiveness we so often hear about.

Who benefits from solar?

The Renewable Energy Target is under review. The solar industry is unhappy at the prospect of having to compete on cost with fossil fuel and they are squealing. Their TV advert features one ugly hag telling you how much she would like cheaper electricity (and indirectly how much she would love you to pay for it). Vote anyone but Liberal.

One thing dumber than voting the entire populace their personal goldmine is to vote one section of industry the keys to the mint.

As an aside, just when will solar be truly competitive?

There are about 8.5 million households in Australia. If you put a 1 kW solar panel installation on each and every one you would generate 8.5 gigawatts of electricity. Subsidise each at $8,000 and the government will shell out $68 billion. By comparison the Loy Yang A coal-fired power station will knock out about twice that amount … even in the dark.

“Fortune,” said Don Quixote to his squire, as soon as he had seen them, “is arranging matters for us better than we could have hoped. Look there, friend Sancho Panza, where thirty or more monstrous giants rise up, all of whom I mean to engage in battle and slay, and with whose spoils we shall begin to make our fortunes. For this is righteous warfare, and it is God’s good service to sweep so evil a breed from off the face of the earth.“

Australia’s Renewable Energy Target has been in the news this week. To the forces of one side of the climate war any change would be an attack on clean energy. To the other side the RET is a cursed impost on consumers and manufacturers that is reducing our standard of living by pushing up energy costs. It is not disputed by either side that the clean stuff can only compete with the dirty stuff if government tilts the playing field by means of regulation and subsidies.

Energy is a fundamental requirement of life. Animals must eat. In fact animals must eat the primary production of plants. A typical terrestrial food chain is three-tiered, eg grass, rabbit, fox. Longer chains are possible eg algae, zooplankton, copepod, little fish, big fish, seal, shark. At each step up the chain there is a reduction of very approximately 90% in biomass. If there is less than about ten times as much prey than predator food is hard to catch. If food requires more energy to catch than the energy it yields the predator starves. It is a biological reality that energy returned must be greater than energy invested (variously abbreviated EROI – energy returned on investment, or EROEI – energy returned on energy invested). And it explains why big fierce animals are rare.

Prior to the industrial revolution most people had to make do with the power of their own bodies plus the odd draught animal. The rich and powerful could put others to work on their behalf and parasitise their labours. Cheap energy makes us all rich and powerful. Buckminster Fuller went to the trouble of converting the energy being put to work in the world to its equivalent in slaves. In 1950, every human on earth had the equivalent of 38 full-time slaves. It would be more now. Our capacity to grow and distribute food, educate our community, enjoy manufactured goods and fight off the barbarians who would like to behead us depends on the availability of enough energy.

There is a fear upon the land that carbon dioxide, essential to that very first step in the food chain, photosynthesis, is a pollutant and will cause us to fry. There have been a number of initiatives aimed at reducing the human output of carbon dioxide. It would be reasonable to expect that such initiatives would reduce the output of CO2 but that doesn’t seem to be essential to their adoption. Burning biomass for example produces more CO2 per unit of energy than does coal or gas but enjoys the blessing of the EU. And then there is wind …

A slight breeze at this moment sprang up, and the great vanes began to move.

“Though ye flourish more arms than the giant Briareus  ye have to reckon with me!” exclaimed Don Quixote, when he saw this.

And of course he said his prayers, lowered his lance and charged.

A slight breeze can spring up at any moment or die away. It means that wind is of little value for base load power. The fossil fuel power station can’t be turned off and on willy nilly so when the wind blows the impact on coal or gas usage is small and the CO2 output is little diminished.

The answer, my friend, is storage. Why don’t we build a very large battery?

Which brings us back to EROEI.

A plant that only generates as much energy as it took to build it has an EROEI of 1 (and had better be pretty). Weißbach et al. investigated the figures for a variety of energy sources and compared them with their estimate of the EROEI required to maintain civilisation at a standard comparable with the US or Germany which is about 7. 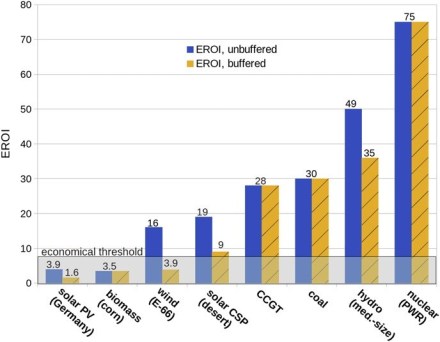 Energy Returned on Energy Invested, derived from Weißbach et al.,with and without energy storage (buffering).  CCGT is closed-cycle gas turbine.  PWR is a Pressurized Water (conventional nuclear) Reactor.  Energy sources must exceed the “economic threshold”, of about 7, to yield the surplus energy required to support an OECD level society.

You can see from the graph that our conventional power plants have an EROEI of 30. Energy is stored simply by storing coal. We set one slave to work, in return we get the output of thirty slaves. Good value. Civilisation flourishes.

Wind performs quite well at 16. Civilisation can flourish whenever the wind blows.

If you would like power when the wind isn’t blowing we must have some storage. The cheapest form of storage is to pump water uphill when the wind blows and generate hydroelecticity when you need it. This is practicable where the terrain permits. This drops the EROEI to 3.9 …  civilisation collapses, we are all beheaded. Any form of battery or chemical storage requires the investment of at least 10 times more energy … you would be better off putting real slaves in a treadmill.

The bird mincers, therefore, are good for only a small proportion of electricity production. Photovoltaic solar and biomass will not cut it. At all. Full stop. In a competitive market no-one would invest money in those technologies. The redirection of taxes or the imposition of regulation to foster these technologies is truly corporate welfare. The Solar Generators that concentrate the sun’s rays on a central boiler or any passing bird or insect by reflection scrape above the line but at a cost to the environment that should be unacceptable. Their EROEI would be somewhere between 19 and 9 unless you shut civilisation down every night.

The population that we have on earth today cannot be sustained without cheap energy. Famine is the result of political failure. If we cannot produce the energy required to grow and distribute food in a stable society there will be war.

Hydro power has an excellent EROEI but requires a particular combination of water and terrain. More of it would be good but in the long run the true solution is inescapable. We will embrace nuclear power or leave the earth to the cockroach.