My first contact with the Asiatic Lion came on my way to Gir. With about 20km to go, traveling through an agricultural landscape on a two lane highway we came to an enormous traffic jam, gridlock.

A lion had fallen into a well. It could not get out. The rescue unit from the national park were in attendance, they had sedated the lion, lifted it out of the well and caged it. The world had come to watch. There is no such thing as a small gathering in India. A small group is simply a coincidence, if they decide to gather expect a lac if not a crore*.

Once the mission was completed the crowd began to disperse and the traffic snarl slowly sorted itself out. My first sighting of an Asiatic Lion was a fleeting glimpse of a caged animal on the back of a truck awaiting resettlement.

The Asiatic Lion Panthera leo persica was well-known to the ancients, Christians were once an important part of their diet though Daniel was not, their former range spread from Bihar, northeast India, all the way to Turkey …

Given the chance lions eat livestock. This brings them into conflict with herders. They will return to their kill which means that revenge is easily visited upon them by poisoning the carcass. They are magisterial, they have been symbols of power and nationhood. It makes them excellent trophies, all the more excellent because they’re large, don’t hide during the day and can be easily approached on an elephant or in a vehicle. They will sit there for you while you load, have a cup of tea, discuss which room to display it in, aim and fire. Sport it never was, nor was courage ever required and someone who could actually shoot could always be next to you to make sure of success.

By the late 19th century, lions had been eradicated in Turkey. The last sighting of a wild living lion in Iran was in 1941 although it didn’t disappear from the national flag until 1980. By the advent of the twentieth century, they were confined to the Gir Forest protected by the Nawab of Junagadh in his private hunting grounds. There are said to have been only a dozen. This is likely to have been an underestimate, the first organised census was in 1936 which showed a population of 287 lions. Still a significant population bottleneck with genetic implications.

The Gir Forest holds the only population of wild Asiatic Lion. An area of 1,412.1 km2 was declared as a sanctuary for their conservation in 1965. There are now more than 400 lions which live in the park and the surrounding agricultural area. Conflict with people is not unknown but by and large the local people are very tolerant and well disposed to them, stock losses are compensated for by the government and tourism is a good little earner.

Tourism, however, is not something the Indian Forest Service does particularly well. The rules for access to National Parks vary from place to place and change frequently. At Gir there are three safari sessions per day, early morning, morning and afternoon, sixty vehicle permits are sold per session. Every vehicle is assigned a route to follow and must be out of the park by the end of the session. You will need your passport to establish your identity before being allowed in, you will not be allowed out of the vehicle. Visitors are not allowed in at night. Book an organised tour in advance. Always get to the gates early and complete the formalities otherwise they will bite into your time.

Once through the gate you are on a dusty road, probably in an open jeep known locally as a Gypsy. The forest is composed mainly of Teak trees but because the region is so dry these are not the huge trees you may expect. They have large leaves which were dry and dropping from the branches when I was there. It pays to cover your binoculars and camera whilst on the move to keep the dust at bay, and remember it will be cold in the early morning.

There are plenty of Sambar and Spotted Deer (Chital) and plenty of birds although chances are the other occupants of your vehicle are only interested in the Lion or even better a Leopard.

I went on seven consecutive safaris and saw lion every time, it’s not impossible to miss out but you would be very unlucky to fail if you took three or more. 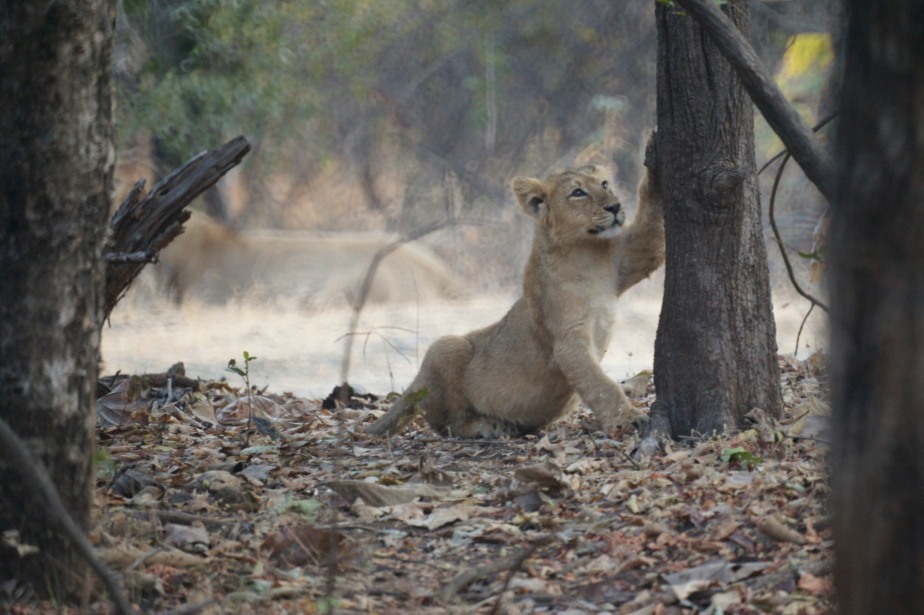 Regular readers will be aware that I do not have an unblemished record with four-wheel driving in wild places. This is the one time we were allowed out of the vehicle and for once it was not me at the wheel, although I was sitting in the corner that collapsed … 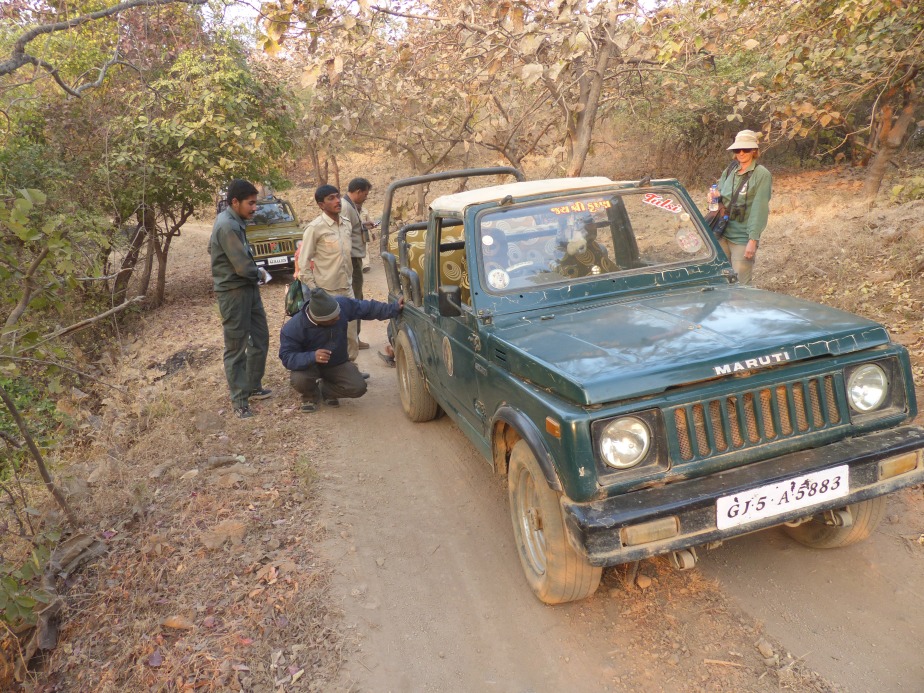 The maps above were shamelessly filched from wildanimalelite.yuku.com which is worth a visit for its beautiful photographs.

The Indian system of numbering things is a little different from the West’s. As with our system, digits are separated by commas for ease of reading. The first comma goes before the last three digits, just where we would put it (1,000). After that, though, it separates every two digits (10,00,00,00,000). So after one thousand the next big one something is 1,00,000 which just cries out for a name of its own which it has. It is a Lac. The plural of Lac is Lakh. Two lakh = two hunded thousand.

A single small population has a precarious hold on existence. Smart mammal scientists in India would like to see more populations of Asiatic Lion (re)established elsewhere in suitable habitat. A sanctuary has been created in the state of Madhya Pradesh. It is almost as large as the Gir reserve and is said to hold good numbers of prey animals. State politics is the principle hurdle. Madhya Pradesh has tourism aplenty because of its tigers, Gujarat is unique in its lions but has no tigers. The matter has been to the Indian Supreme Court and was found for the reintroduction, the hearing of an appeal by the Gujerati Government is pending. Good luck lions.