Claudius, the unlikely Emperor of Rome, needed a military conquest to earn a little respect. In AD 43, he sent four legions to invade the Catuvellaunian kingdom in Britain. They were successful and Claudius was able to make a visit soon after. The Catuvellaunian capital was given a Romanised name and Colchester became the accidental capital of Roman Britain. It took another thirty years for the Romans to subdue the rest of the country.

Dover sits at the narrowest point of the English Channel. It was settled and used long before the Romans but they fortified it and set up lighthouses.

Between Dover and Colchester there’s a problem, the Thames. The Romans built a bridge. The site was obvious it had long been in use. At low tide it was shallow enough to ford, at high tide you could take a boat. Why exactly there?  Because a natural causeway to the south bank through an otherwise marshy area sits opposite a high point on the north bank.

The river was now an opportunity, ships could come up the Thames, goods could be transported north or south. A village grew up around the bridge.

London Bridge came before London. Once it got started it grew apace.

Between London and Colchester there was another problem. The River Lea. Just how do you spell it, Lea or Lee? You’ll find both so neither is wrong but in some contexts one is more right than the other. But the more important problem is negotiating the marshes and crossing the river. Traditionally at Old Ford, Hackney.

Bear in mind that the prevailing wind is from the west.

Problems, opportunities, accidents. A bridge, a growing town, a main road that runs northeast, the River Lea, it’s marshes, a west wind … these are some of the things that made the East End, and the East End made me.

Docks grew up on the Thames, associated industries grew nearby, ropemaking for example. Some industries are smelly, tanning for instance, put it down wind from the richer citizens. Or hazardous like making gun powder. The big city needs grain and fresh water, take it by barge down the River Lea. It’s tidal … harvest the tide for milling grain.

In 1720 John Strype described London as consisting of four parts …

the City of London, Westminster, Southwark, and “That Part beyond the Tower”.

That part beyond the Tower was spreading northeast up the main road into the countryside. It was constrained by the marshes and the River Lea.

And not necessarily a sober state of mind. In 1736, the Middlesex Magistrates complained …

It is with the deepest concern your committee observe the strong Inclination of the inferior Sort of People to these destructive Liquors, and how surprisingly this Infection has spread within these few Years … it is scarce possible for Persons in low Life to go anywhere or to be anywhere, without being drawn in to taste, and, by Degrees, to like and approve of this pernicious Liquor.

The pernicious liquor was gin. 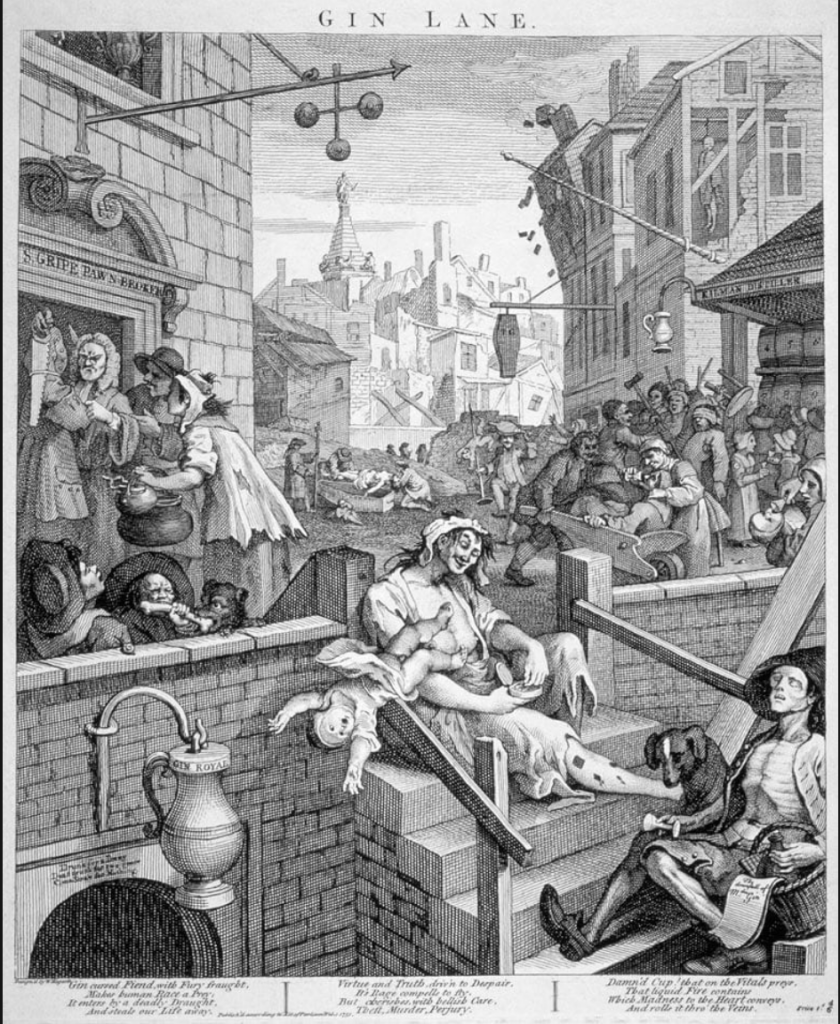