I drove through the area some time ago. I was on my way to check out the Dalynong Flora and Fauna Reserve which I had heard was a good chunk of not too badly disturbed woodland habitat. I noticed an old wooden bridge and made a note to come back and photograph it one day.

It’s not an easy spot to photograph, there is a new bridge parallel to it and it is surrounded by River Red Gum woodland. From most angles you either can’t see it or you have a modern concrete structure intruding on the ambience. It’s just a sad old bridge crumbling slowly into the Avoca River. There are no sign posts leading you there. Facebook doesn’t love it.

I wanted to catch it in the evening light so I spent some time poking around. I was rewarded by a pair of Rakali chasing each other’s tails in the water.

The bridge was built in 1863 and is the oldest wooden bridge in the State of Victoria and one of only two to survive the great floods of 1870. It is heritage listed and from the statement of significance we learn that …

Archdale Bridge is technically significant for its humped timber deck, designed to permit the ready flow of flood waters. Humped bridges were not uncommon in an era of horse-drawn vehicles, but were impractical with motorized vehicles; very few survive.
Archdale bridge is one of very few timber river bridges surviving in Victoria to possess large squared-timber pier ‘caps’, combining with squared and shaped corbels. Those heavy caps, over ten metres long, are cantilevered beyond the outer piles and fixed to the pile tops by mortis-and-tenon construction. They represent very rare examples of early bridge-carpentering traditions.

I think Facebook is wrong. There’s plenty to see in Archdale. This bridge is beautiful and deserves a bit of love. 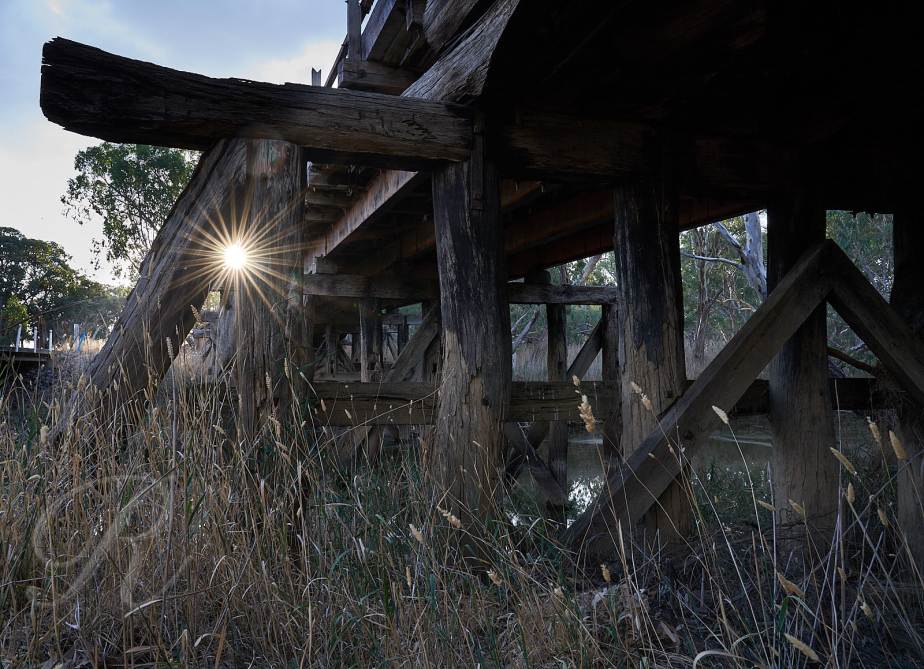 One thought on “The Archdale Bridge …”