… the ship was lost. On this occasion it wasn’t a ship or even a sheep it was the wheel bearings on the trailer and they became so warm that the assembly was welded to the axle. We discovered this about 30km west of Merriden on a Friday.

In an impressive display of alliteration the trailer was loaded onto a tilt tray tow truck and was delivered to the Merriden caravan park. A mechanic was kind enough to come and take off the axle. The search for a replacement could begin on Monday. But was fruitless and abandoned on Tuesday. On Wednesday it was decided that a new one would have to be fabricated. Thursday’s child has far to go. So do we and we are looking forward to it. Maybe Friday.

Merriden is located in the wheatbelt of Western Australia. It is a pleasant little town of just under 3000 people. It’s on the pipeline, the noisy rail line and a busy road, the caravan park especially. It has it’s own big granite rock collecting water by a system of walls, aqueduct and dam. There is a conservation park adjacent to the rock. The streets have well maintained grass verges and the Roy Little Park speaks of civic pride. It would be a worthy entrant in a tidy towns competition.

It has a painted silo. 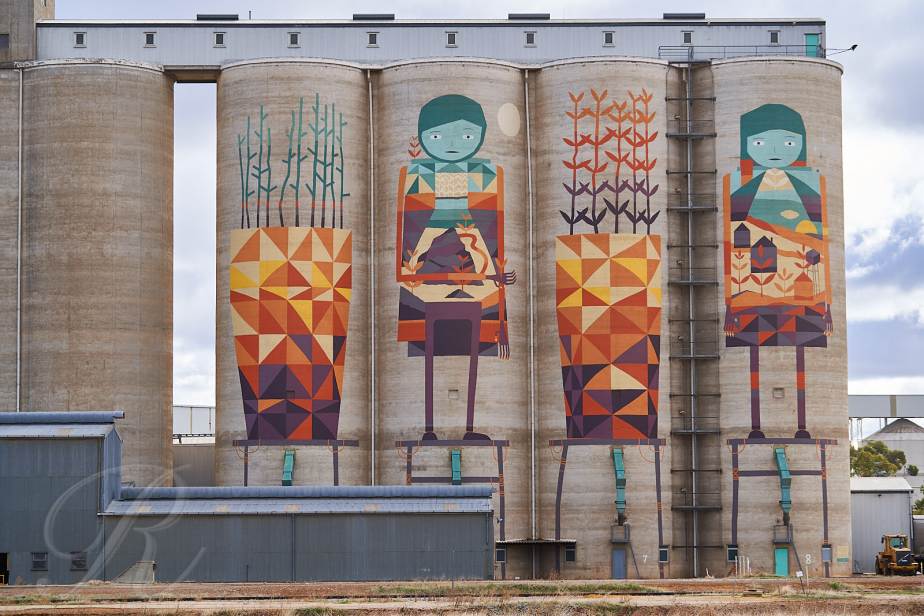 The surrounding country side is green presently, it being winter. What was once mallee and Salmon Gum woodland has been cleared for wheat. People have to eat. The various rocks have escaped the clearing and most of them are busy collecting water. Some natural vegetation has survived around the rocks. From a conservation perspective it would be nice if there were more connecting vegetation. So far we have visited Karalee Rock, Bruce Rock, Eaglestone Rock, Elachbutting Rock, Wave Rock, Totadgin Rock, Baladjie Rock and Beringbooding Rock where the water is stored in the largest concrete water tank in Australia. Oh, and the Humps.

It’s not the style of camping that we enjoy and Merredin is not where we would choose to stay. If anyone had actually heard of the place it would be the butt of jokes like Christchurch (spent a week there one Sunday) or Blackpool (first prize a week in Blackpool, second prize two weeks in Blackpool).

Aside from the shower the nicest thing about caravan parks is the people. The salt of the earth stay in caravan parks and are almost always willing to engage in conversation and swap travel yarns. Almost no one stays more than one night here so every day brings new friends. The missing axle is an excellent conversation starter and the conversation always improves after they finish chiding me for my ha’porth of tar.