There are mangroves aplenty around Broome and plenty of birds that use them. There are about 19 species of mangrove up here so the habitat varies from place to place and to some extent the suite of birds varies, too.

Access to mangroves is often difficult due to deep mud and the density of the vegetation. Mosquitoes can be a little tedious as well. There are a couple of spots that are reasonably easy of access and quite rewarding to visit.

The mangroves that run from Town Beach to Chinatown can be entered in various places and are really good for Red-headed Honeyeater. Streeter’s jetty is the most famous in birding circles and is excellent. Out of town at Little Crab Creek is the place to go for Dusky Gerygone. Between the two you can find just about all of the local mangrove specialists, and it’s not only the birds …

Fiddler crabs and mudskippers abound. they probably make a nice meal for some of the larger denizens. And there is plenty of invertebrate life in the mud.

A couple of the Pachycephalidae are mangrove specialists, the Mangrove Golden Whistler and the White-breasted Whistler …

The Honeyeaters are represented by these two …

The Red-headed is always found in or near mangroves, the Brown is found in a much wider range of habitats but is common in the mangroves.

Nicely posed to show us how it got its name, the Broad-billed Flycatcher will wander into adjacent Melaleuca woodland but is essentially a mangrove species.

And circling above the mangroves, the Brahminy Kite.

We flew Qantas, they boarded on time, took off on time, landed a few minutes early and didn’t lose our luggage. Good job, Qantas.

But … they messed up our veggie breakfast. We got one instead of two. It was an ommlette. Had Gayle needed to do emergency repairs to a shoe it would have come in handy as a temporary sole. We didn’t know whether to complain about not getting a meal or getting a meal.

We’re staying at a house with a large Pulp Fiction poster on the verandah. Very nice accommodation.

We wasted no time heading for the Port, the Sewage ponds and the town mangroves. Very nice new bird hide at the sewage ponds.

Isn’t that what everyone does when they visit Broome?

I’m tired out from all this travel. Need a holiday. Where to?

Western Australia perhaps. There are 2.646 million square kilometres to get lost in and just 2.6 million people to share it with. That’s almost three times the size of  Texas which is a mere 696,241 square kilometres. Texas is a little crowded though with more than ten times as many people (nearly 28 million).

So, it’s off to Broome, a favorite stamping ground. You can read about my last visit while you wait for me to share this visit.

I first visited Broome in 1996. I played a small part in an Australian Wader Studies Group expedition that caught and banded birds like these …

If you click on the picture it will fill your screen and you can test your diagnostic skills. The back arrow on your browser will return you here. (This is true of almost all the photos on this blog).

It’s a place that has a great magnetic pull. A couple of the guys on the expedition stayed on and made it their home. I have been back many times and usually stay with one of them.

Most of the waders nest in Siberia and come to Oz to escape the winter snow of their breeding grounds. Roebuck Bay is a key resource for enormous numbers of them. It is the premier site for shore birds in Australia.

William Dampier explored the northern coasts of Western Australia back in the 17th century. The bay is named for his ship. By the 1880’s the surrounding waters were being exploited for pearl shell. In 1883 John Forrest chose the site for a port town that would serve the pearlers as a base. He named the place after Sir Frederick Broome who was the Governor of WA at the time. Sir Fred was not much impressed to have his name associated with such a humble outpost.

Quite an assortment of humanity worked in the pearling industry. The Japanese were especially prominent and there is a cemetery that provides a last resting place for many of their dead.

They also exerted their influence in the Second World War when they bombed the place four times killing 88 on one occasion.

The pearl industry is still important but has changed considerably. In past times it was all about pearl shell which was used extensively for buttons. Nowadays buttons are made of plastic and the industry makes its money out of pearls, mainly cultured.

Broome is the administrative centre for the Kimberley and is a base for the mining and gas extraction industries.

Above all, though, it’s a tourist destination. It boasts an international airport, an open air cinema, dinosaur footprints, camel rides, spectacular sunsets and a nude beach that extends some 17km from Cable Beach to, believe it or not, the mouth of Willie Creek.

This visit was part of a package with Zegrahm Expeditions so I got to stay at the Cable Beach Resort, such luxury. Nonetheless I played hookey the first day and went birding with my good friend Chris Hassell who is a professional ornithologist with Birdlife International and the Global Flyway Network.

A splendid day was had and at the end of it I was deposited at the port and embarked on the Oceanic Discoverer for a voyage to Darwin via the Kimberley coast. 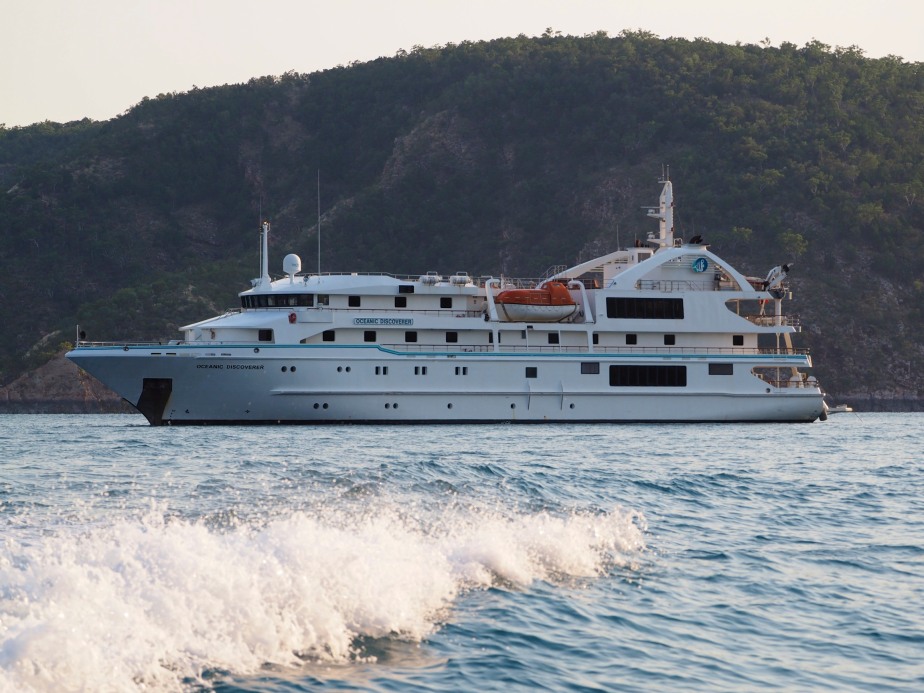 And a splendid vessel she is.

The Kimberley adventure brought us finally back to Broome. We finished the trip at the Broome Bird Observatory.

One of the trio still needed a few mangrove birds for his Aussie list and Little Crab Creek, not far from the observatory, would be the place to find them. A tour of Broome including the Port, the playing fields and the sewage works is birding heaven. Add the proximity of Roebuck Bay, which even over winter holds a wonderful trove of migratory waders, Pindan woodland and open plains and a hundred species in a day can be seen with relative ease. I gave a guarantee that I would deliver the White-breasted Whistler and the Dusky Gerygone.

The first morning saw us in the mangroves beating off the mozzies. The whistler duly surrendered and what’s more, the first one to parade for us was a beautiful male, usually much harder to find than the drabber females and young males. But no Dusky Gerygone. Then off to Nimilaica, Barred Creek and back up the Derby Road to Taylor’s lagoon. A great day, some great birds but …

Dawn of day two and we were back in the mangroves, swatting the mozzies, ignoring the White-breasted Whistler, the Broad-billed Flycatchers, Yellow White-eyes, Mangrove Grey Fantails, Sacred Kingfishers, Brahminy Kites and the rest, reputation is at stake, I have never dipped on the gerygone, ever.

The Dusky Gerygone is found only in the mangroves from about Broome, south west along the WA coast to about Shark Bay. Gerygones are little birds, often grey or brown or greyish-brown, distinguished by subtleties of eyebrow or tail tip, and amongst all these the Dusky is distinguished by its lack of distinction, no contrasting tail tip, the subtlest of eyebrows. The clinching detail is the pale iris! You need a good look.

A Yellow White-eye peeked out … 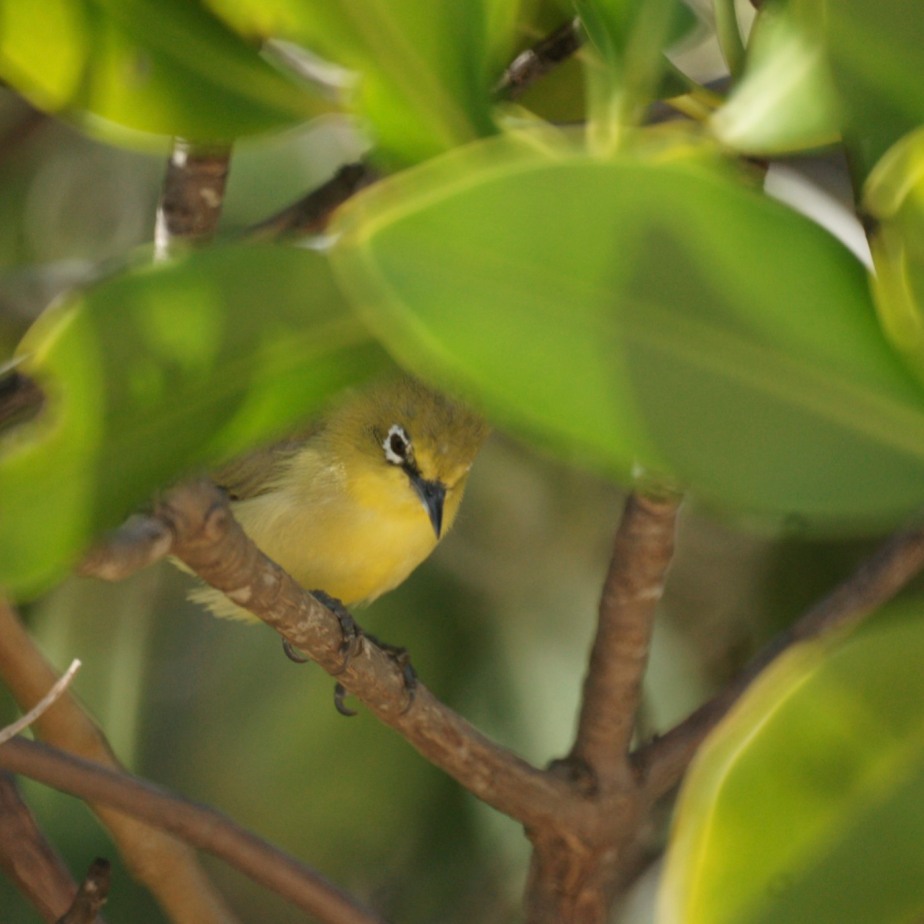 Dime a dozen. Mangrove Golden Whistlers are much harder to find, I doubt that one has ever been dismissed as lightly as this one … 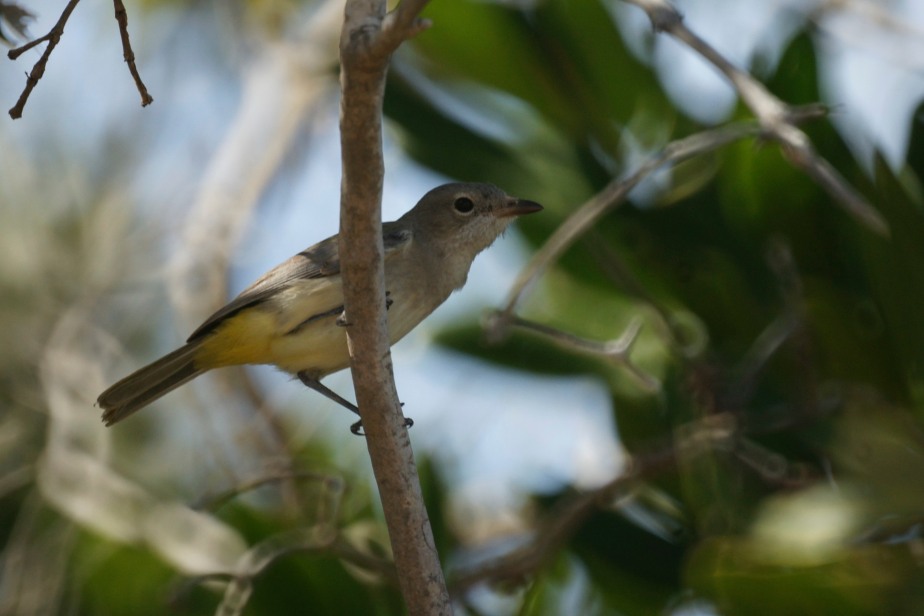 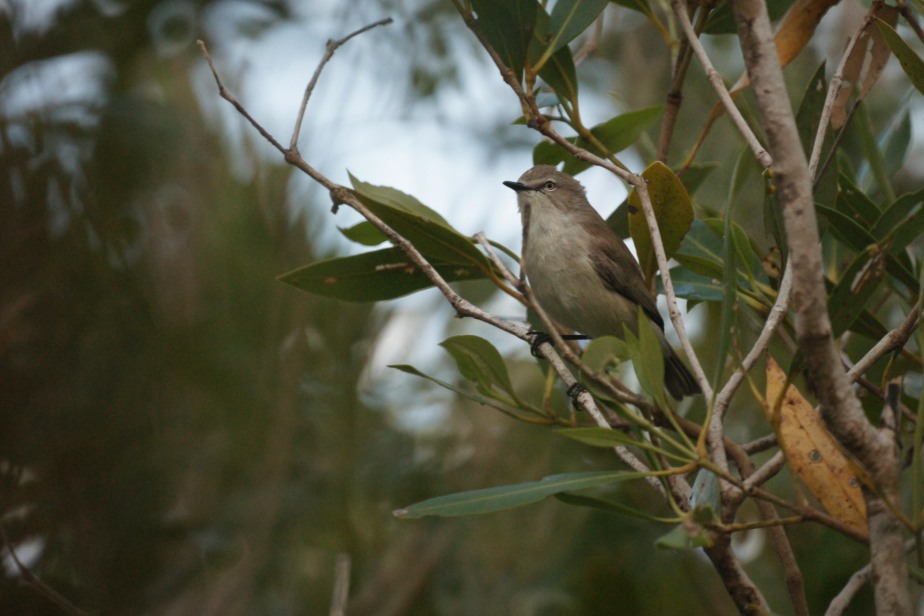 A fabulous and fabulously remote part of Australia.

It is the northernmost portion of WA, it is entirely north of the tropic of Capricorn. It has a wet season, the southern hemisphere summer and a dry, the winter. It is scenically splendid, and among many other wonderful creatures it is the home of the Black Grasswren. The McGee Australian birdlist hadn’t had an addition for a couple of years, an expedition was in order. Enquiry revealed that the only “accessible” places where it might be sought with a reasonable chance of success are Bachsten Gorge and the Mitchell Plateau. Early in the dry was tipped as the best time, swollen rivers close many of the roads in the wet. Access to both sites is from the infamous Gibb River Road.

The western half of the Gibb River Road provided access from Derby to cattle stations as far as, you guessed, the Gibb River. It was completed in 1956. Subsequently it was pushed further east and is now the scenic route from Derby to Kununurra. It is a reasonably well graded dirt road, 4WD is recommended. Almost all the car hire companies prohibit using the Gibb River Road. Broome is a very civilised place to begin and end, a circular tour can be completed via the Great Northern Highway, which is sealed and has the added advantage of taking you past the Purnulu National Park, better known as the Bungle Bungles.

This year has seen very late and heavy rainfall, as the time to go approached none of the roads were open. Two hundred millimetres of rain fell on Broome just before we arrived, but the outlook further west was encouraging. McGee and two intrepid companions left Broome on the 7th of June. The Gibb River Road was open, but for access to the Mitchell Plateau the King Edward River needed to drop a fair bit. It had a few days to do it.

In Derby we visited the wetlands and sewage works, a fair test of the 4WD capability of our Toyota Prado. The covering of red mud that it acquired made us look especially authentic. We headed for Windjana Gorge for our first camp site … <NEXT>.