Let any man lay the map of Australia before him, and regard the blank upon its surface, and then let me ask him if it would not be an honourable achievement to be the first to place foot in its centre.

Wrote Charles Sturt, who left Adelaide in 1844 with 11 horses; 30 bullocks; 1 boat and carriage; 1 horse dray; 1 spring cart; 3 drays, 200 sheep; 4 kangaroo dogs; 2 sheep dogs … and an inexplicable tendency to switch between commas and semicolons in the one list. He was the leader of a group of 16 men. They were the first to put their shoes in many places but other feet had always preceded theirs and they fell short of the geographic centre of Australia by 150 miles.

This was Sturt’s third, and final, major foray. The party was in the field 18 months, they had to contend with extremes of drought, near starvation and heat that burst their thermometers. One, Mr Poole, died of scurvy. They were the first Europeans to reach the heart, some would later say the dead heart, of the Lake Eyre basin.

We may find it a little odd that he would take a boat on such an excursion but his prior expeditions had entailed considerable journeys on the Murray and Darling Rivers and he was exploring at a time when people still expected to find an inland sea or at least the Australian equivalent of a Nile or Mississippi.

Sturt was a great bushman, a very determined explorer and distinguished, too, by treating the aborigines that he encountered with respect and consideration. He also brought most of his men back alive.

A little to the north of Blackbraes National Park, Mark and I had already crossed the tracks of Ludwig Leichhardt and Augustus Charles Gregory. In 1844 Leichhardt had travelled from the vicinity of Brisbane north west across the base of Cape York, continuing beneath the Gulf of Carpentaria and then north to the settlement of Port Essington (not far from modern day Darwin). From there he had sailed back to Brisbane by boat. Augustus Charles Gregory’s 1855-56 expedition did the boat ride first. From near where Leichhardt finished his land journey Gregory headed south west and following a river that he named in honour of Charles Sturt. His most westerly point on that expedition is now known as Lake Gregory. He then followed Leichhardt’s route back east to Gladstone. Both of these explorers led later expeditions.

The map that Sturt thought so blank has a little more written on it these days but there is still room to write the names of pretty small places in pretty large letters. Mark and I drove into the desert via the Min Min Way. We intersected the track of other exploring parties before we met with Sturt’s. One, of course, is the track of Burke and Wills. Sixteen years after Sturt set off from Adelaide Burke’s expedition left Melbourne with the intention of crossing the entire continent south to north. In that Burke was entirely successful although he intended to follow that with another crossing north to south.

We also crossed the 1858 track of Augustus Charles Gregory. Sturt discovered and bestowed the European name on Cooper’s Creek. Gregory, who obviously had high regard for Sturt, travelled from south east Queensland to Adelaide via Cooper’s Creek.

Burke and Wills ensured that Cooper’s Creek would hold an enduring place in Australian history by dying on its banks.

At some point we must also have crossed the track of Leichhardt’s 1848 expedition that left Queensland intending to cross the continent east to west. None of the seven men that set out ever returned, their track and where they perished is unknown. 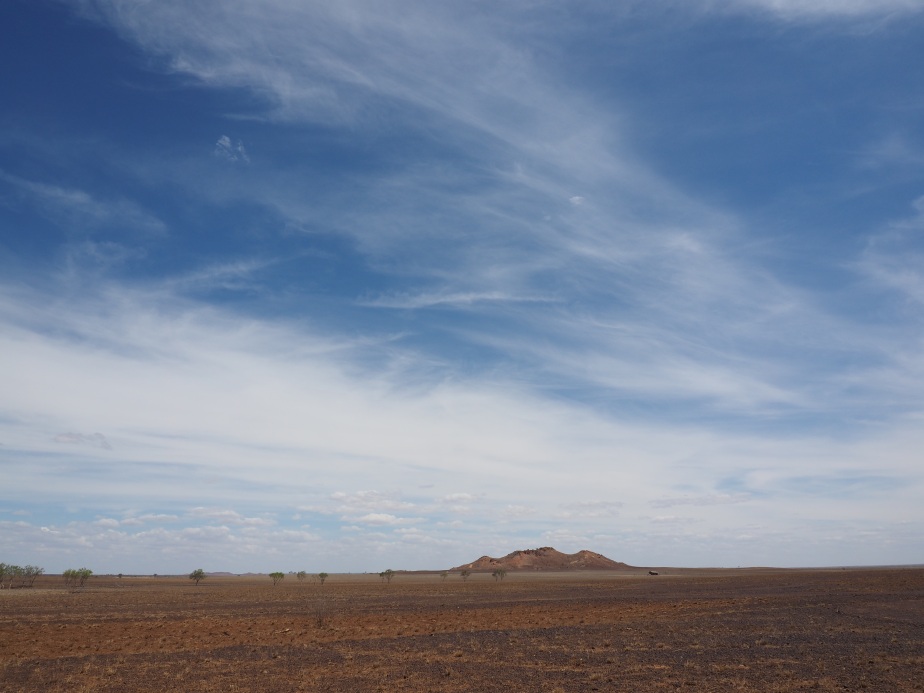 We were travelling in an air-conditioned 4WD with a fridge full of beer, well, almost full, there was some food as well. Our intention was to spend a few days looking for the world’s most venomous snake, the Inland Taipan Oxyuranus microlepidotus. This is found on the deeply cracking black soils of the Diamantina and Cooper Creek drainage systems, more often in the cracks than on the surface. It preys on the Long-haired Rat. The principle vegetation on the black soil is Lignum and that is home to the much sought after Grey Grasswren which we had both seen before but would have been very happy to see again.

So we spent most of our time floundering around Lignum bushes, camera at the ready, sweat running down our backs, trying to beat the flies away from our faces, one foot down a crack, the other raised in readiness for the next crack and in imagination, at least, every crack containing a Taipan. And that was absolute luxury when compared to the explorers who showed us the way out there.

“Don’t you want to photograph the Taipan?” asked Mark.

“Then why have you got the telephoto lens on?”

“Because I’d rather photograph the world’s most venomous snake at a distance”.

Don’t hold your breath waiting for the photographs of snake or grasswren. We saw neither. So I shall say no more of them. I will concentrate on the scenery between lignum swamps and tales of the great explorers.