An early start from Etty Beach and we were soon on our way up onto the tableland. This is the premier bird watching destination in Australia but one the party had visited quite a few times before. We had allowed ourselves two days here and we intended to wring the absolute maximum out of our stay.

We drove up via South Johnstone and Millaa Millaa and made our first birding stop at Hypipamee National Park. We were quickly rewarded with Fernwren and Mountain Thornbill but after that birds were fairly slow to surrender and some of the regular suspects didn’t turn up at all. But if we were surprised at that we were even more surprised by Mark’s discovery of a Lumholtz Tree Kangaroo wide awake in the mid morning … 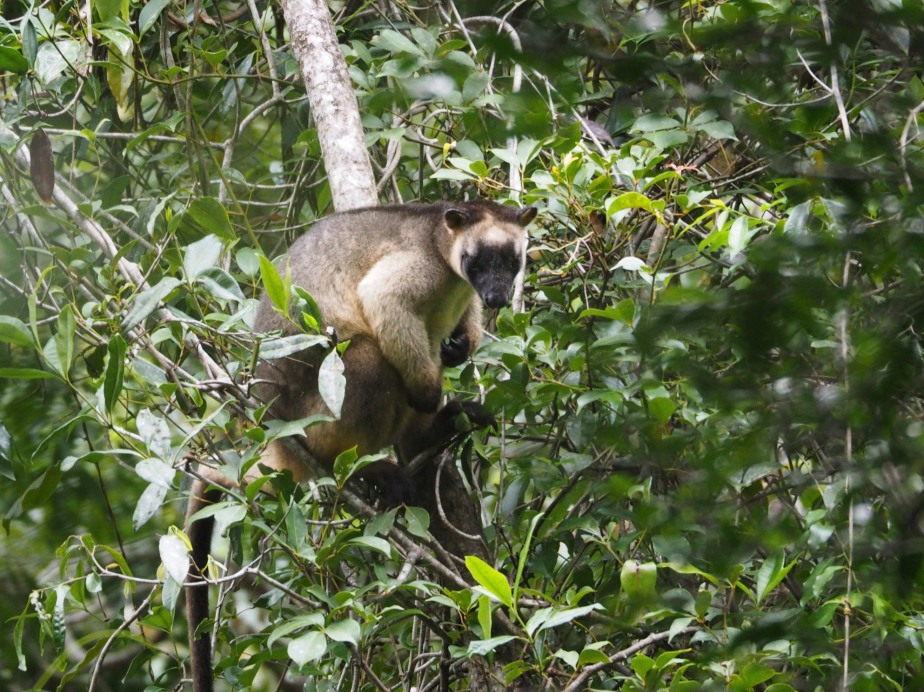 Our destination for the night was Malanda, specifically chosen so that we could spotlight for this extraordinary creature, the best way to find this always elusive animal. They feed on leaves of rainforest trees in which they are agile and competent climbers aided by impressive claws and the ability to use their hind legs independently. When they come to the ground they bound along in the same fashion as other kangaroos. Generally they spend the daylight hours curled up in dense foliage sound asleep.

Hypipamee is also called The Crater in honour of its striking geological feature, a diatreme created, so they say, when gas exploded beneath a granite surface layer blasting a pipe to the surface. The pipe is 70 metres in diameter and contains a lake. It is 58 metres from rim to the water level and the water is another 70 metres deep. It would appear from the viewing platform that visitors have made a significant effort to fill it in with thrown objects. If it weren’t for the 400 metre walk from the carpark it would now be full of fridges, TVs and old mattresses. The walls are shear but somehow a population of Saw-shell Turtles has made its home there. I suspect though that their descendants will not be making any contribution to the wider gene pool.

From there we made our way up Highway 1 towards Atherton. The next stop was the Wongabel Forest walk. Much of the tableland would have been forest but most has been cleared for agriculture. For some inexplicable reason the patch that the walk is in was reforested. It must have seemed a quite revolutionary idea at the time. Many of the trees are labelled, it makes for a very pleasant and informative walk.

A complete contrast awaited us at Hastie’s Swamp where we quickly notched up a list of water birds along with a few migratory waders. We had lunch there. A majestic White-bellied Sea Eagle also dropped by for lunch causing considerable unrest among the residents. From there to Malanda we looked out for Brolga and Sarus Cranes, there are often quite large flocks to be seen in the surrounding fields but on that occasion we were not successful.

For a commercial caravan site Malanda is a very pleasant place to camp. There is plenty of room and easy walking access to the Johnstone River and the Malanda Falls Conservation Park. There is a new and rather splendid visitor centre in the conservation park. We took tea in the company of Red-legged Pademelons and two of Australia’s Megapodes, the Brush Turkey and the Orange-footed Scrubfowl. These are mound building birds. They lay their eggs in their mound where the vegetable matter they have incorporated composts providing all the necessary heat for incubation. The youngsters hatch, dig their way out and are immediately able to fend for themselves.