To say that the Democratic Republic of the Congo has a troubled history is an understatement.

It is a vast country with immense natural resources. It could be wealthy but internal division made worse by instability in neighbouring countries has led to a civil war that has cost the lives, directly or indirectly, of about 6 million people.

You’d have to be nuts to visit.

Since I’m nuts, why not visit Virunga National Park where 150 Park Rangers have been killed by insurgents in the past decade <National Geographic>. Five more would be killed in combat shortly after I left <defenceWeb>.

And let’s throw in the ascent of an 11,000 ft volcano sometimes called <The most dangerous volcano in the world>. Why so dangerous? Because of the active lava lake, the height of the mountain and the fact that the lava is much less viscous than lava elsewhere. In the 1977 eruption the lava traveled at speeds of up to 60 km/h (40 mi/h) the fastest lava flow ever recorded. Typically lava flows at about walking pace.

A 13 km fissure opened in the south flank of the volcano, spreading in a few hours from 2800 m to 1550 m elevation and reaching the outskirts of the city of Goma, the provincial capital on the northern shore of Lake Kivu. Lava streamed from three spatter cones at the end of the fissure and flowed in a stream 200 to 1000 m wide and up to 2 m deep through Goma.        <Wikipedia>

About 15% of Goma, a city of about 1 million people, was destroyed and has since been rebuilt (about 12 feet higher than previously).

The group assembled at the Virunga National Park office at the foot of the mountain where some old shell cases had been cutely recycled. 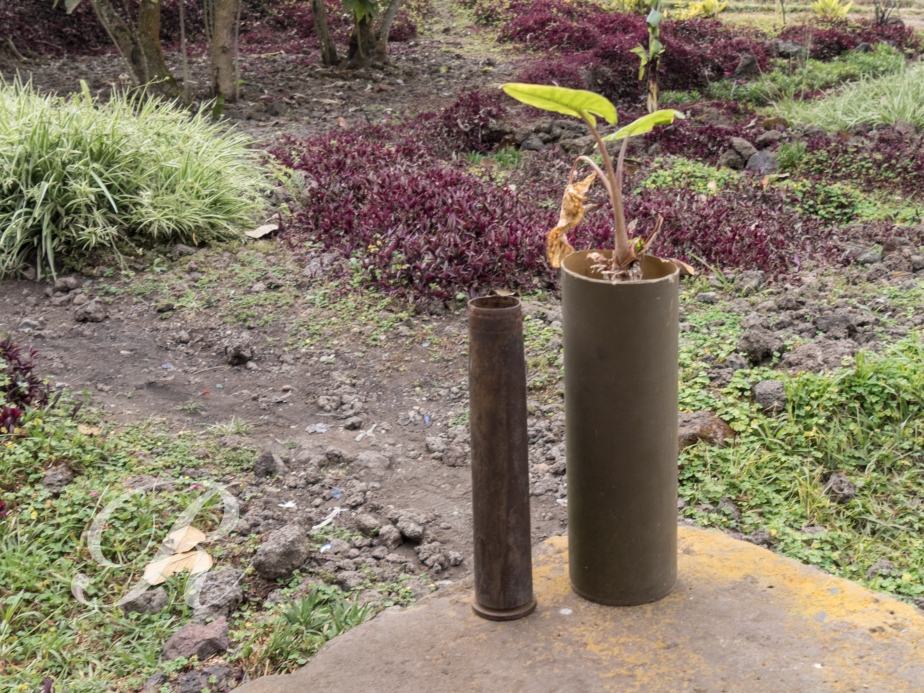 There would be twelve tourists, about ten porters and two well armed rangers to reduce the risk that our “agréable  ascension” would be to heaven.

Five hours later I was counting 50 steps before allowing myself ten deep breaths. Then fifty more steps. Our accommodation was in sight …

The last few steps were accompanied by a miracle. It was repeated every time a new person arrived. The haggard face of an exhausted mountaineer (we’d earned the title, I’m sure) would turn to wonder, their eyes would light up and an expletive would tumble from their lips.

You could warm your hands on it.

The hot spots played across the surface, geysers of hot lava occasionally spewed into the air, the smoke became denser or lighter. If you’ve ever lost yourself in contemplation of a fire it was a fraction of the experience that Nyirongongo’s crucible has to offer.

It was a cold night but the sleeping huts were not as well ventilated as the kitchen hut.

The morning brought some mist

and a beautiful sunrise over Mt Karisimbi … 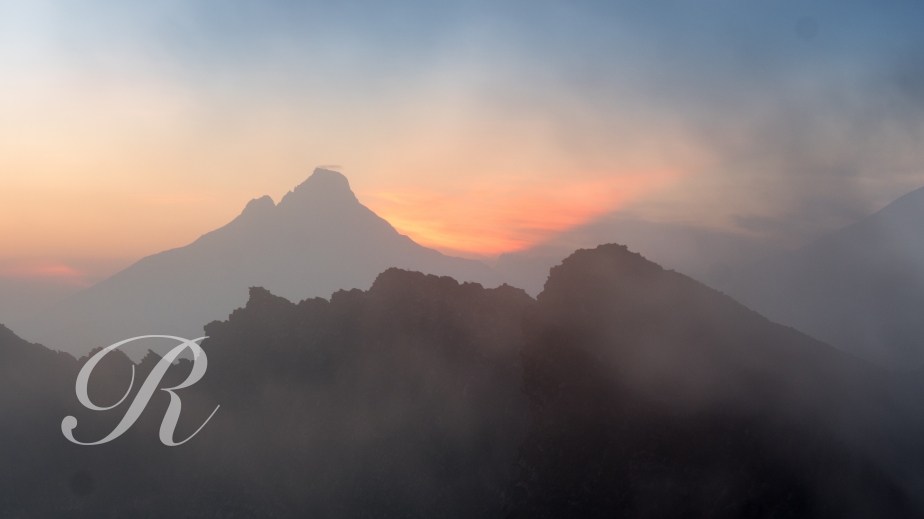 One thought on “Nyiragongo …”