The first military action of the American Civil War took place at Fort Sumter, Charleston, South Carolina in April 1861. The war was a brutal affair that took the lives of about 8% of America’s white males aged 13 to 43; 6% in the North and 18% in the South. In the aftermath the North prospered and the South was impoverished for a century.

By 1864 the South were losing but progress was very slow and costs were high. It was an unpopular war. Lincoln seemed unlikely to win a second term, his opponents were promising to sue for peace rather than continue to fight for victory. Atlanta, Georgia was a crucial resource to the Confederates. It stood at the intersection of four important railroad lines that supplied the Confederacy and was a centre of military manufacturing.

Maj. Gen. William T. Sherman was commanding the Union forces ranged against Confederate troops commanded by Gen. Joseph E. Johnston. Rather than make a frontal attack, Sherman had chosen several times to pass Johnston’s position and threaten his supply line. Johnston had fallen back each time.

After two months and 70 miles (110 km) of gaining ground with few casualties on either side , Sherman’s progress was blocked by imposing fortifications on Kennesaw Mountain, near Marietta, Georgia. This time Sherman ordered a large-scale frontal assault.

The Battle of Kennesaw Mountain was fought on June 27, 1864. The Union forces suffered about 3,000 casualties in comparison to Johnston’s 1,000. Sherman wrote to his wife …

I begin to regard the death and mangling of couple thousand men as a small affair, a kind of morning dash.

Essentially it was a Confederate win but on the far right of the Union lines troops under the command of Maj. Gen. John M. Schofield were able, once again to outflank Johnston’s position, all that lay between them and Atlanta was the Chattahoochee River. Johnston withdrew to the river where he was outflanked yet again and was relieved of his command in favour of John Bell Hood.

Sherman took Atlanta after a month-long siege. It was the beginning of the end for the Confederacy and enough to swing public sentiment behind Lincoln. He was reelected and concluded his second inaugural speech with a plea for reconciliation …

With malice toward none, with charity for all, with firmness in the right as God gives us to see the right, let us strive on to finish the work we are in, to bind up the nation’s wounds, to care for him who shall have borne the battle and for his widow and his orphan, to do all which may achieve and cherish a just and lasting peace among ourselves and with all nations.       Abraham Lincoln March 4 1865.

The visitor to Kennesaw Mountain can walk to the summit passing the positions where the Confederate army was dug in. The city of Atlanta can be seen from the top. A few cannons remain on duty where so many lost their lives.

At the foot of the hill there is a museum and an informative video is shown regularly. 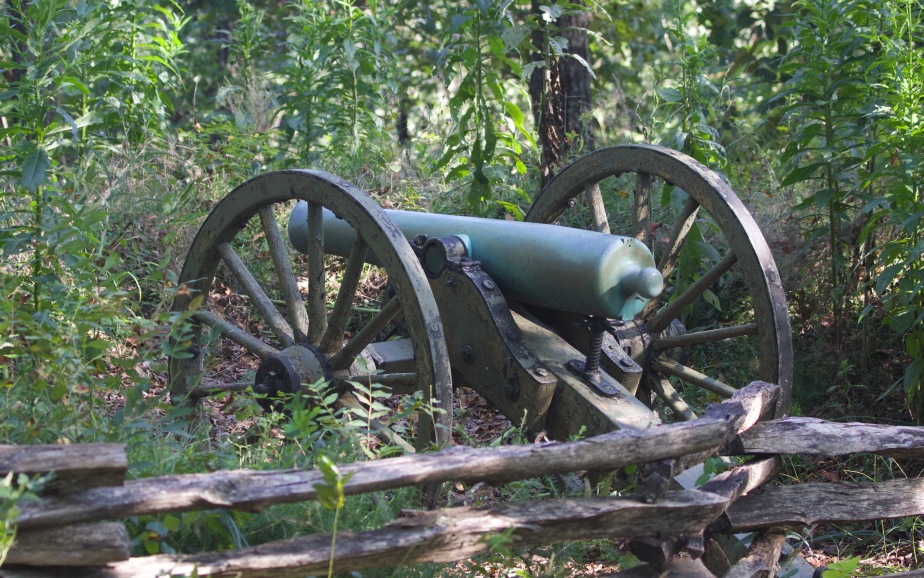 Lincoln was assassinated on April 14, 1865. His successor, Andrew Johnson was able to announce the end of the war the following month.